Church of Santa Maria at Panzano in Chianti 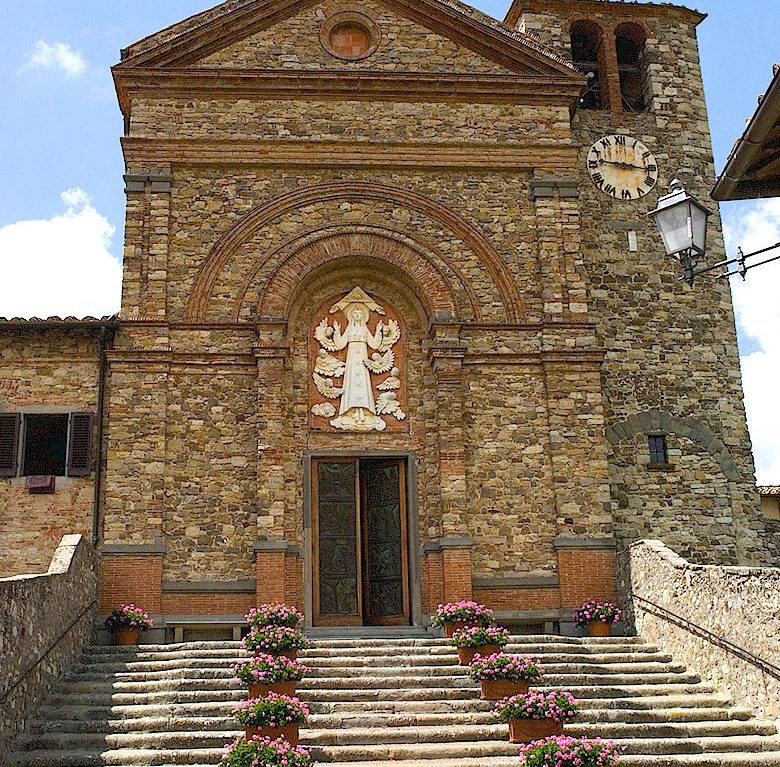 Church of Santa Maria at Panzano in Chianti

The Church of Santa Maria at Panzano in Chianti

History, art and architecture of the Chiesa di Santa Maria Assunta in Panzano

History of the Church of Santa Maria at Panzano

The previous church of S. Maria in Panzano dated from the Renaissance period. It had a single nave without an apse and measured about 19 m x 9 m. In the rear wall, behind the High Altar, there were two stone-carved windows with iron decorations and similar windows existed in the facade. The side altars rested against the side walls and from the left side there was access to a vaulted chapel where the baptismal font was housed. This was very likely the font that exists today, octagonal in shape, made of pietra serena and dating around the year 1730. In the floor, there were numerous burials of the most notable Panzanese families of the time: Firidolfi, Quercetani, Petrucci, De Luigi, Baldi, Cappelletti etc.

The Renaissance Church of Santa Maria was derived from the expansion of a primitive Romanesque chuch, mentioned in the lists of the “Rationes Decimarum per la Tuscia” for the years 1274-75. It was probably enlarged in the 14 C or 15 C with the conversion of one of the perimeter towers of the mediaeval Castle of Panzano into a bell tower.

At the end of 1800, the church was confined to the area between the two large, interior arches at the front and rear, with neither side chapels nor apse, and the bell tower remained detached from the church itself. Between the church and the bell tower, was the entrance to the cemetery (camposanto) which then led to the Capella della Compagnia della SS.ma Annunziata. The latter is thought to be the same chapel that we see today, except that the direct access from the church, which was closed during a previous restoration, has been re-opened.

The current appearance of the Church of Panzano is due to the major restructuring that took place during the last years of the 19C and the first years of the 20 C, with the creation of the side chapels and the extension of the central nave towards the front to incorporate the new facade and also part of the bell tower, thus closing the entrance to the old cemetery. The latter had been abandoned following the Edict of Saint Cloud (issued by Napoleon in 1802 and promulgated for the Kingdom of Italy in 1806). The central nave was also expanded towards the rear of the church, creating the semi-circular apse. These extensions are clearly recognizable by observing the left side of the Church from the old cemetery.

Art works in the Church of Santa Maria at Panzano

The oldest art work in the parish church of S. Maria Assunta is a small 14 C panel by Francesco di Ser Cenni depicting the Madonna and Child, framed in the following century by a panel with saints by Bernardo Rosselli. The panel is located in the third chapel on the left, entering the church. It was probably placed there after its replacement on the altar of the chapel with the Annunciation from the workshop of Ridolfo del Ghirlandaio, carried out around 1520.

The Annunciation and the Crucifix are still found today in the chapel of the Annunciation with an entrance on the right side of the church. In the same chapel there is also an ancient gilded wood ciborium in the shape of a hexagonal temple, a fine work of manufacture of the late 16 C, whose pictorial decorations of the doors are attributed to Michele di Ridolfo del Ghirlandaio himself, as well as some ancient vestments embroidered in gold and silk and ancient reliquaries

Another important Crucifix attributed to a Florentine sculptor of the 15 C, is located on the altar of the first chapel on the left and is also made of poplar wood with a thong of linen cloth in plaster and painted in blue.

At the entrance of the church, on the right side, is the octagonal, pietra serena baptismal font made in ca. 1730 by the then prior Giuseppe Maria Mammoli by order of the bishop of Fiesole, Luigi Maria Strozzi.

Also on the right side, in the first chapel above the altar, there is a depiction of Saint Mary Magdalene de’ Pazzi and Saint Anthony of Padua painted by Pietro Dandini in the mid 1600s, and on the side wall a canvas has recently been placed that depicts San Martino, from the homonymous church of S. Martino in Cecione, located a short distance from Panzano and now deconsecrated.

On the altar of the third chapel on the right side there is a 17 C Crucifixion about which nothing more is known.

A large painting by Alfredo Cifariello depicting the Assumption of Mary into Heaven, painted in 1985, hangs behind the old vertical altar.

Finally, the massive cypress wood door of the church contains eight bronze panels by the sculptor Umberto Bartoli (1965), depicting the Holy Family, the Sermon on the Mount, the Four Evangelists, the Ecstasy of Saint Francis and Saint Catherine of Sienna convincing the Pope to return to Rome from Avignon. Some significant events of the Catholic Church of those years are also commemorated in bronze, including the Second Vatican Council, the Visit of St. John XXIII to Regina Coeli and the meeting of Blessed Paul VI with the Patriarch Athenagoras. The Madonna surrounded by angels in white plaster on the facade of the church directly above the door is also the work of Umberto Bartoli.