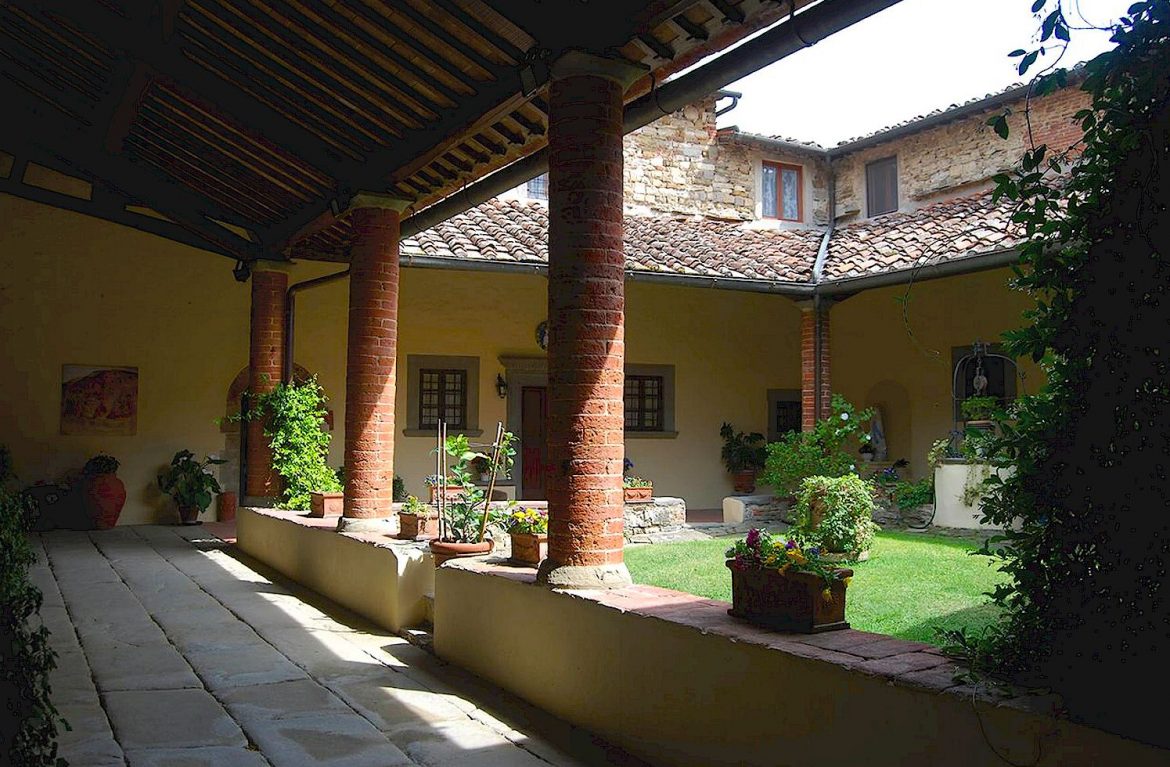 The Pieve di San Leolino at Panzano in Chianti

A Romanesque gem in the centre of Chianti

The earliest surviving documentation of Pieve di San Leolino at Panzano dates from 982, under the name San Leolino a Flacciano, in a parchment held at the Abbey of Passignano, although two sculptural fragments preserved inside church suggest that it might have an even older origin.

Structural and stylistic characteristics suggest that the Pieve di San Leolino dates back to the 12 C. In mediaeval times, the church was of great importance and 14 suffragan churches depended on it, including the one inside the castle of Panzano. In 1508, the patronage of the church passed to the Florentine hospital of Santa Maria Nuova and during the 16 C restoration and additions were carried out to give the church its current external appearance. Restoration undertaken in 1942 returned the church to its original Romanesque appearance.

The pieve (parish church) of San Leolino is a basilica with three naves delimited by quadrangular pillars in Alberese stone supporting wooden trusses and each ending in a scarsella (small apse). In the 16 C, the facade portico was built, with sandstone columns and a sandstone portal.

Inside, in correspondence with the first span on the right, the monolithic baptismal font with very simple shapes was placed.

Also in the 16th century, the semicircular apse was demolished and was replaced with a quadrangular pocket; the two minor apses were built in more recent times and are the result of invention.

In the eighteenth century the church underwent an internal transformation in Baroque style: the walls were plastered, and the side altars were built, all interventions removed with the restorations of 1942 and on the occasion of the restoration of the early eighties the internal floor was also redone.

A portal located on the right wall leads to a small cloister, whose porch has a wooden roof supported by brick columns. On the sides of the porch there are the rooms of the parsonage which for the style of the portals and windows must have been built in the sixteenth century. The farm buildings are also part of the parish complex.

On the left, compared to the facade, is the oratory of the Compagnia del Santissimo Sacramento. It is a small church characterized by its simple and dignified eighteenth-century facade. The portal, with a broken pediment, and the window above it, the angular corners and the slopes of the roof all have a frame in pietra serena.

Works of art held by the Pieve di San Leoleno

Numerous works of art are preserved inside the parish church. The oldest is a sandstone slab, possibly a pluteus, which is now being used as support for the altar table. This work is ornately decorated with a depiction of a cross with intertwined ribbons and swirls, dating from the 8 C or 9 C.

The important paintings include:

Among the sculptures, in addition to the early mediaeval pluteus, there are two glazed terracotta tabernacles placed near the altar and attributable to Giovanni della Robbia, and an 18 C plaster reliquary bust of Sant’Eufròsino that once belonged to the Oratory of Sant’Eufròsino.