The Oratory of Sant'Eufrosino at Panzano in Chianti 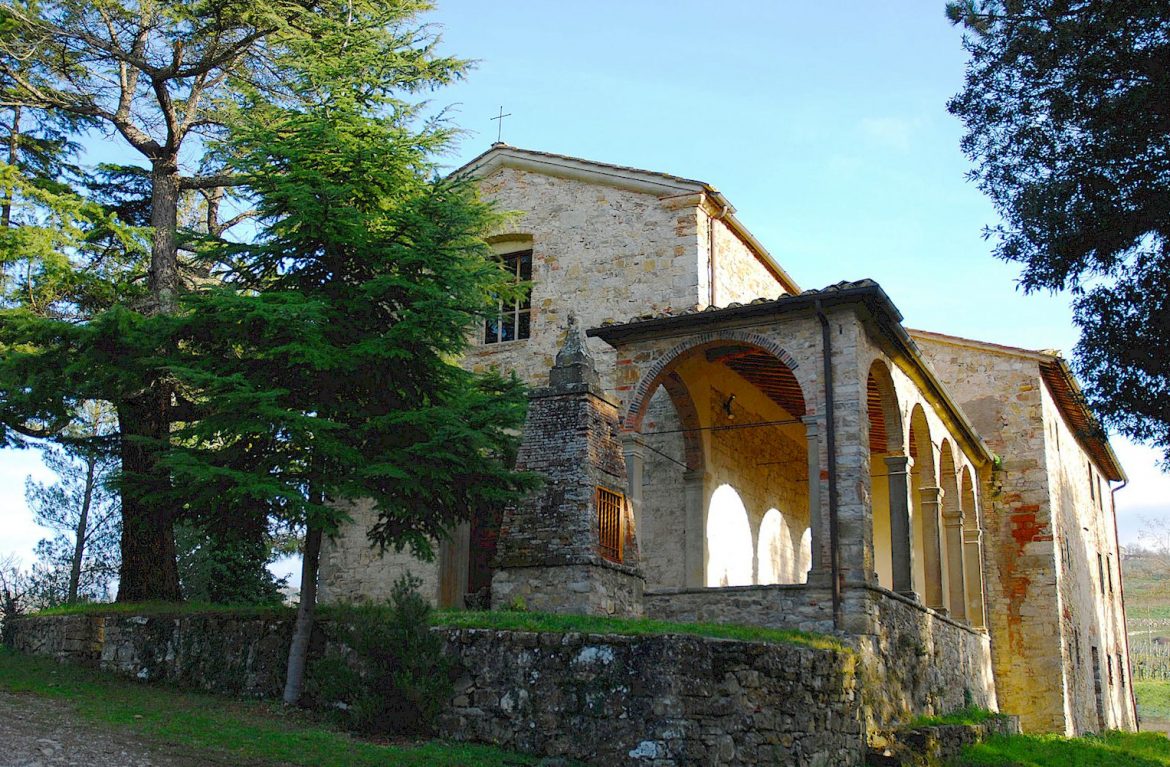 The Oratory of Saint Euphrosynus at Panzano in Chianti, Tuscany

Sant’Eufrosino (Saint Euphrosynus), came to Tuscany from Cappadocia in Anatolia and was one of the original evangelisers of Chianti. Two places of worship named after him were built in the Chianti area. One is this oratorio (oratory) and the other is the Commenda di Sant’Eufrosino at Volpaia in the municipality of Radda in Chianti. Tradition has it that the oratory was built at the place where Sant’Eufrosino died, near Panzano. The oratory became a destination for pilgrimages linked to the cult of a spring with healing powers, the Fontino di Sant’Eufrosino. The latter consists of two masonry columns that support a sandstone lintel. A bust of the Saint was placed above the spring.

The first mention of the Oratory of Sant’Eufrosino is found in a bull dated 11 March 1102 from Paschal II to Giovanni, the bishop of Fiesole.

The current structure dates back to no earlier than 1441, when Pope Eugene IV was in Florence. A special indulgence was issued to anyone who had made a donation for the construction of the oratory. The oratory was surely reconstructed at that time because in the oratory as it is now, under the porch, there are the remains of filaretto in the initial part of the right wall, remains that belong to a building of a more modest size, perhaps the building mentioned in the document of the 12 C.

Circa 1514, the oratory and the parish church of San Leolino were added to the patrimony of the Hospital of Santa Maria Nuova in Florence and in 1565 an inventory of the properties of the hospital was prepared. One of the maps shows the Podere di Sant’Eufrosino, with its borders, annotations and three buildings: the Chapel, the Workers’ House, and the Oratory of San Frosino.

The oratory as a structure dates back to the 15 C, with a gabled roof and cross vault and a single nave closed by a scarsella, a small apse protruding from the main structure. The portico on the right side of the facade was added in the 17 C, when restoration of the interior greatly changed its appearance. The altars were rebuilt and a large niche was created to house a polychrome plaster statue depicting Sant’Eufrosino and a small reliquary. A large transverse arch with capitals in sandstone carved with leaves divides the nave from the presbytery. The most important art work of the oratory is located on the back wall of the presbytery. This is a Gothic ambo (tabernacle) in the shape of a shrine, located on the left corner of the back wall of the presbytery and which was originally intended to house the saint’s relics. This aedicule is composed of two pillars on which a trilobed arch is set inside a cusp decorated with rampant leaves and at the bottom there are two large tiles with four-lobed perforations. The Peruzzi family coat of arms is carved into the support, perhaps indicating that the Peruzzi commissioned the work. This ambo was probably recovered from a Florentine church and donated by the Peruzzi at the time of the expansion of the oratory.

In the piazza behind the oratory, there is a small chapel that tradition says was erected in memory of a miracle of the saint, which at that point caused a pool of water to form. Inside, the Chapel houses a 12 C sandstone altar, as well as traces of 15 C frescoes. There is also the opening of a well, whose waters are reputed to have therapeutic qualities.

Near the oratory is the so-called Fontino di Sant’Eufrosino. It is a spring that Sant’Eufrosino would have used during his life. Above the spring a small chapel was built supported by four columns and inside the ex votos are kept.