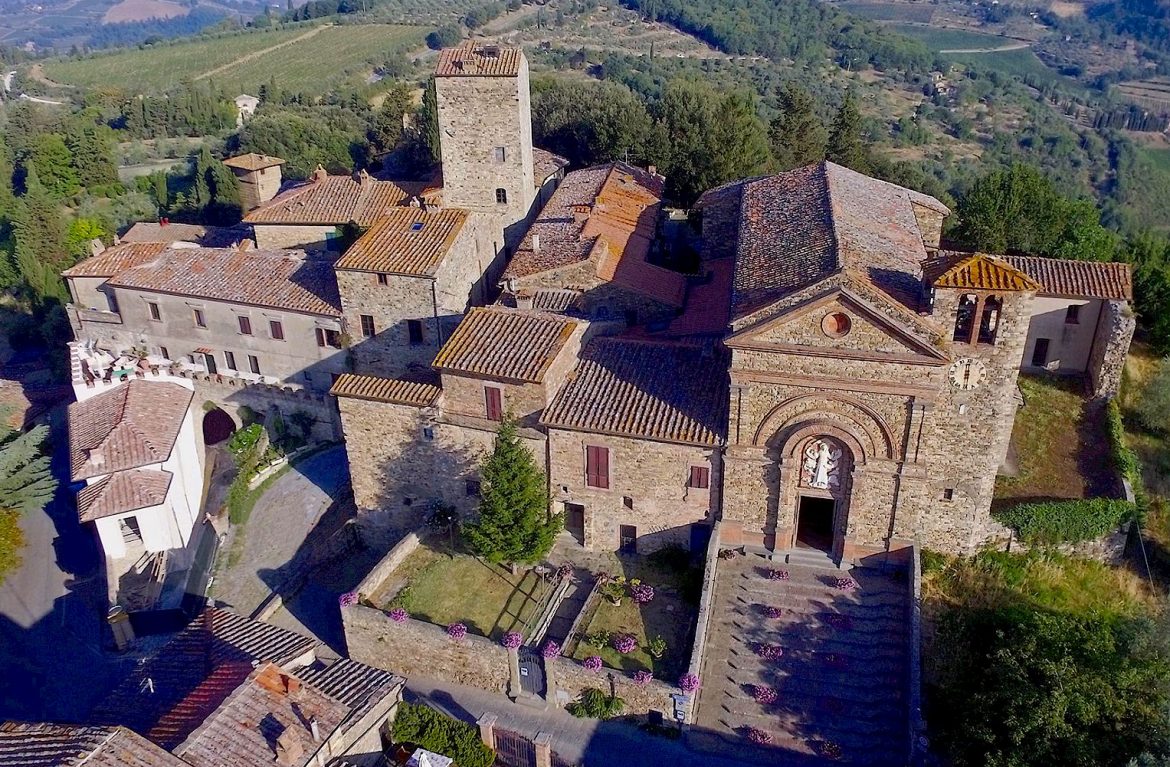 The architectural remnants of the Castello of Panzano in Chianti

The castle of Panzano is located on the highest and oldest part of Panzano. Panzano was a settlement of Roman origin that developed during the Dark Ages and is mentioned in several documents from the 11 C onwards. Panzano was a fief of the powerful Firidolfi family and for centuries the main centre of the Val di Greve League. Consequently it was also the most fortified centre and this is confirmed by the remarkable remains of the castle that was constructed, probably later than those of Montegrossi and Brolio, by the Ricasoli-Firidolfi family, around the feudal keep. Surrounding the castle on all sides at a distance of 500 m to 1 km, there are a remarkable number of outlying watch towers, now incorporated into farmhouses for the most part. Most of the curtain wall, of irregular semirectangular shape, that surrounded the castle keep on the hill is still preserved although incompletely. On two sides, it has been decreased in height while in the south-east part it is completely missing, having been replaced by the Church of Santa Maria, an ancient dependency of the Pieve of San Leolino. Two corner towers have also been preserved, one of which has been re-used as the bell tower of the church while another still preserves traces of the brackets that supported the machicolations.

The internal structure of the castle is simple. The sole access portal has a beautiful arched vault and some surviving elements suggest that it was preceded by a small barbican or other defense, today lost. From this portal, we pass along through a single road to a small piazza where there is a high, square tower, the original keep, that retains its original height and rises above all the other buildings now constructed inside the precinct of the castle. Other interesting structures within the precinct include a building next to the access portal which has a distinctly mediaeval character. Based on the precision of the stonework and the shape of the archivolts, we can conclude that all the structures of the castle of Panzano date back to the 12 C. The castle was built by and belonged to the Firidolfi family or to the Panzano family who, according to some authors, moved to Florence gave their name to the current Via Panzani. In the mid-19 C, it passed in part by succession and in part by purchase from the Mancini Counts to the Buoninsegni family (later Tadini Buoninsegni) to which it belonged until the second half of the 20 C.

Just outside the castle was the ancient church dedicated to Santa Maria which at the end of the 19 C was replaced by the current one. A village developed outside the castle walls from the 12 C onwards, along the access road on the ridge of the hill and very soon became an important market place.